How to bring about change: An interview with James Ozden

Recently, at the Conference on Animal Rights in Europe (CARE), I (Jared) saw a brilliant, lightening talk by Director of the Social Change Lab, James Ozden. James only had ten minutes to present a rather lengthy, in-depth report on the efficacy of protests movements. I found my interest extremely piqued and was curious to hear more, so I approached James afterwards. He kindly agreed to be interviewed for PHAIR on the great work his Social Change Lab is doing on questions such as, “How effective is disruptive social action, and what makes it so?” Here is what he had to say.

James, could you briefly introduce yourself.

I’m James Ozden, the Director of Social Change Lab, where we conduct social movement research into the effectiveness of grassroots campaigns, and how to make them more effective. Originally my academic background was in Physics – so I’ve gone slightly astray(!) – but I’ve been interested in and working on social movement theory in some way for about four years now.

You recently founded the Social Change Lab (SCL). Can you share a little about your vision for the SCL – what motivated you and what are its aims?

My desire to start Social Change Lab came about during my time working on strategy at Extinction Rebellion and Animal Rebellion. When devising our future campaigns and strategy, we had so many unanswered questions about how to carry out mass mobilisation most effectively. Even for the most seemingly obvious things like should we target primarily government or business, or organise in a centralised or decentralised way, there were often not good resources to guide us.

Additionally, we would get a fair bit of pushback that our tactics weren’t effective, and there was little research conclusively answering this question. This seemed wild to me, given how much grassroots movements have driven previous societal transformation, from the Civil Rights Movement, to Women’s Right to Vote, to Marriage Equality. Our aims are to help answer some of these critical questions: How effective are grassroots movements, and what factors make some movements more successful than others?

Our vision is for a world in which we make rapid progress on some of the most pressing issues of our time, such as animal suffering or climate change. To do this, we believe we need accurate information on the effectiveness of various strategies to achieve social change, including mass protest.

Prior to this, you were Director of Animal Rebellion. For readers who don’t know, could you briefly explain what is Animal Rebellion, and do you see the Social Change Lab as an extension of the work you did for Animal Rebellion? For example, do they share overlapping goals? How are they different?

Animal Rebellion is an organisation building a mass movement for animal and climate justice in the UK. It started from the fact that despite animal agriculture, forestry, and land use forming over 20% of global greenhouse gas emissions, there was almost no attention being given to animal farming within the climate movement. We wanted to address this, and use similar tactics to Extinction Rebellion, who had succeeded in shaping the climate discourse in the UK (and globally).

In some ways you could say Social Change Lab is the extension of the strategy work I was doing at Animal Rebellion, but the link is somewhat tenuous! Social Change Lab really came out of the need to understand exactly how effective were the disruptive tactics we were using, as I was getting more worried about the negative consequences of our actions.

SCL recently released a report on the efficacy of protest movements. What are some of the key lines of evidence that protest movements have contributed to substantive, enduring changes in society and/or moved public opinion?

We actually found there was a substantial amount of academic literature examining the various impacts of protests movements, but it had just not been collated in one place. In our literature review, we found significant observed impacts of protest movements in various outcomes, such as public opinion, voting behaviour, policy, and public discourse.

Surprisingly, some of the strongest literature was on the impact of protest movements on voting behaviour.  Across four natural experiments, effect sizes on voting behaviour have been found to be between 1 – 6 percentage points, depending on the particular movement (Madestam et al., 2013; Teeslink and Melios, 2021; Wasow, 2020). We find this to be quite compelling evidence since, unlike public opinion polling, voting often shows people’s true preferences, rather than their stated preferences.

That said, polling from YouGov (see below) clearly shows an increase in public support for climate change during the largest Extinction Rebellion campaign, with little other reasons to explain this sudden increase in support. 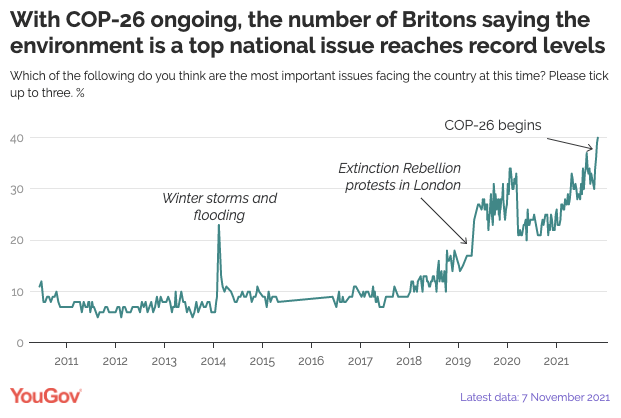 This is something we plan on doing more research into – as the mechanisms are not always crystal clear. Often, there are several mechanisms for why a protest movement might lead to positive social change, such as:

However, as you point out, media coverage is something that is crucial to all the various theories of change. The media serve an amplifying role, ensuring that the wider public is exposed to the protest movement. Without widespread media coverage, only hundreds of people might see a protest. With national coverage, this number can be in the tens of millions. For example, our public opinion polling for Just Stop Oil found that around 60% of the UK had heard of Just Stop Oil, which is around 40 million people. This is often a reason why protest movements use disruptive tactics – to garner more media attention.

Sadly the academic literature on protest is not as large as one would hope, but there is still plenty of amazing work! Disruptive protest is one where I think there is actually quite a lack of research currently. Most studies focus on the impact of violent vs. nonviolent protests, whereas few study whether disruptive yet nonviolent tactics produce different outcomes. This seems particularly important to study, given the increasing use of disruptive yet nonviolent tactics employed by movements nowadays.

Due to this, it’s extremely hard to conclusively say exactly how disruptive protests should be. From some of our public opinion polling, as well as literature on the Radical Flank Effect (radical flanks of a movement can make moderate factions seem more reasonable), it seems like nonviolent yet disruptive protests don’t produce a backfire effect that is overall negative for the issue. More likely is that it means the specific group taking action is liked less, but support for the overall cause can be neutral or even improved.

However, it’s unclear how far this extends. We generally believe the more “extreme” tactics get, the more likely you are to invite unwanted consequences, for example, movement repression or losing public support. Personally, I think when we cross into the territory of certain kinds of property destruction (e.g., destroying cars, aggressively breaking windows, etc.), a backfire effect becomes more likely.

I certainly think there are some similarities – one example being that both climate and animal advocates are campaigning for the lives of others, whether that’s animals or people who live on the other side of the world. Additionally, climate activists have strong reasons to care about animal issues, due to the huge amount of environmental destruction caused by animal agriculture. Where I fear it diverges is something called the Small Animal Replacement Problem, where climate activists might encourage eating chicken over beef (to reduce greenhouse gas emissions), but this actually increases the number of animals who are suffering, due to the difference in animal sizes. This is something that animal advocates should take care to guard against, and ensure it does not become a mainstream recommendation within climate circles.

What strategies do you see activist movements taking in the future?

Due to some recent books, such as How to Blow Up A Pipeline by Andreas Malm, I anticipate we will see more radical tactics in the climate movement, which might include greater property destruction. This could also be true for the animal advocacy movement, where Animal Rebellion was recently drilling the tyres of dairy trucks to stop production.

What are some outstanding questions about disruptive action and activism that you would like to see more researchers working on?

How can our readers best get in touch with you / learn more about SCL?

You can check out our website at www.socialchangelab.org, email me at james@socialchangelab.org or find me on Twitter – @JamesOzOz. We have a newsletter you can sign up to, as well as view our research here. I also have a personal blog, Understanding Social Change, where I occasionally post about animal advocacy and social movement related topics in a more informal way!